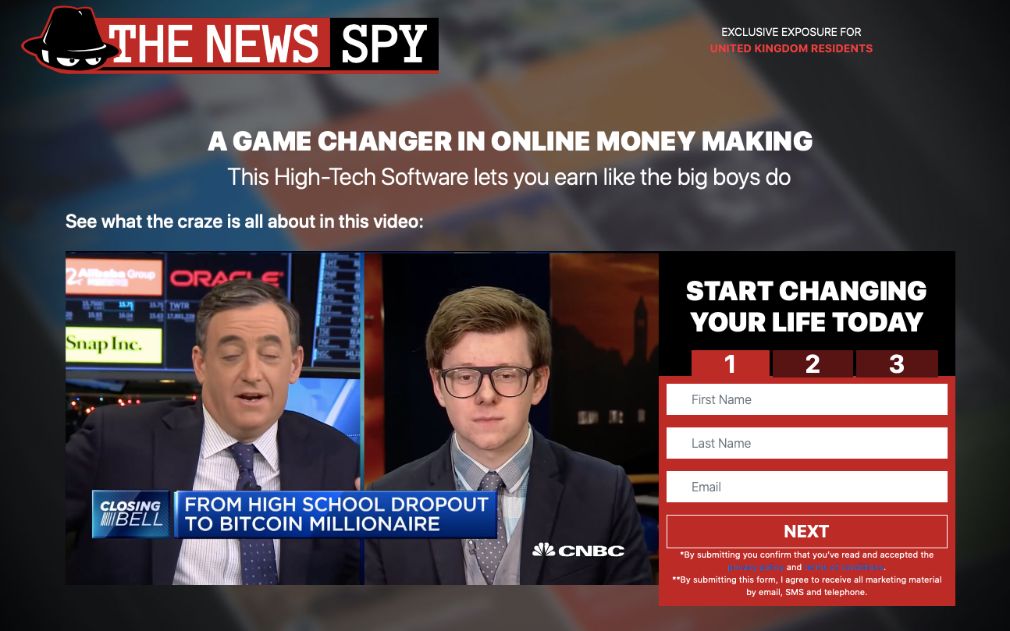 Welcome to our Official News Spy Review and Scam Investigation.

The News Spy Scam is being marketed as success “formula” in online money-making and a “game changer”. In reality, the News Spy fraudulent software and fake signals app is a very polished get-rich-quick scheme. Now, before we continue with our detailed News Spy Review, we’d like to get point out that we are not associated or affiliated in any way, shape or form with the News Spy scam software. Hence, there is no conflict of interest and our review is honest and independent. So have you heard of this program before? Are you seriously considering the News Spy system? If so, then its critical you read our detailed review before you decide to invest.

Scam Alert! Newly-discovered evidence produced by our research staff indicates with a high degree of certainty that the News Spy signals (its NOT an auto-trader) software is a confirmed financial scam which is rightfully BLACKLISTED and should be avoided at all costs. Its also important to mind the fact that the broker we were assigned to was Wise Banc, which is an unregulated Forex and CFD broker and managed by Orion Service EOOD with an address in Sofia Bulgaria. The strange thing was that the popup we received had a message that said “Your Broker is Prime CFD’s”, but in reality we signed up for Wise Banc. This type of amateur technical integration adds an additional layer of suspicion on top of an existing situation which is problematic at best and most likely dangerous (for your wallet). It’s also vital to point out that our News Spy scam investigation was prompted by complaints about a highly deceptive and misleading system which we now know to be the brainchild of a fraud affiliate network operating in collusion with offshore brokers in a blatant attempt to defraud and victimize unsuspecting day traders and opportunity seekers (that’s you). In fact, we know the real identity of the crooks behind this software, and they have been peddling fake apps since the early days of Binary Options. We shall reveal their identity as we continue to unravel the facts and layers of deception behind the fake News Spy scam software. Keep reading our intriguing News Spy review to see exactly what type of evidence our staff was able to produce and how we were able to expose these charlatans.

Proof of Fraud
Here’s a screenshot of the official News Spy website with Erik Finman (the rich kid with glasses). You can see it includes a signup section and some hyped up messages about a “high-Tech software which lets you earn like the big boys do”. Additionally, this corrupt scam uses the stickers and logos of accredited news sites like CNBC  and Coin Desk as a way to lend legitimacy to the scheme. In fact, the exact opposite is true and those logos are genuine, but the News Spy software was never listed on any of them.

Moving forward, below is the testimonials section of the News Spy crypto app. If you look closely on the bottom right-hand side you will see an image of a man named “Dean S.” from the US. This man is actually a cheap fiverr actor and his name is David. He also has a websites where he tries to teach marketing tricks, but we are not impressed as it looks very amateurish by design.

And finally here is the News Spy fake app diagram, where they try to illustrate how the software actually works. Tried out this software and obviously its a bogus app which was designed to get you to lose money. This illustration is a sleazy attempt to bait you, and yes it does look very professional and convincing but that is exactly what makes it that much more dangerous.

The News Spy Review
The News Spy SCAM is promoted as a software which “disrupts” the trading scene and as a unique system which generates money for you by only working a few minutes daily. Obviously we don’t believe these liars, and their phony story about a news intelligence hub which analyzes news and trends from across the globe. The facts are taken out completely of context and whats really happening here is that they are using the media hype around Bitcoin as well as other cryptocurrencies to peddle their dirty signals software. Obviously, the signals are set to lose and that is the only guaranteed fact here. There is no genuine code or trading algorithm, its just some parameters set on random trading packaged to look good and sound attractive.

Get Ready To Lose Money With The News Spy
The main reason why we’re BLACKLISTING this filthy scam is because of trader feedback in the form of complaints and grievances. Our complaints desk received multiple reports about customers who joined the News Spy scam by mistake, and they are constantly telling us that the software is pure trash.

Fake News Spy Reviews
Originally we were not able to spot any reviews (neither positive nor negative). However, as time progressed the News Spy scam turned viral and is currently receiving high praise by some of the industry’s most loathsome review websites. We have added a screenshot below as a point of reference, so if you suddenly feel a “sixth sense” which is telling you something is wrong you should stop and re-evaluate your position because fake reviews are extremely misleading.

Who Is Really Behind The News Spy SCAM?
Here’s an alarm bell that should resonate very clearly. Assuming Erik Finman is not the person behind the News Spy, we have no way of knowing who really is behind it. A WHOIS check reveals the site belongs to an anonymous entity, we don’t see any type of real person taking credit for this system, there is no social media or LinkedIn profile associated with the app, and there is no physical address or ANYTHING which may lead us to the conclusion that the News Spy is legit. Remember, transparency plays a crucial factor when risking your money, yet the level of anonymity surrounding The News Spy simply invites additional suspicion rather than more approval.

Still Unconvinced?
At this stage of today’s review, you can see for yourself exactly how unethical and misleading The News Spy scam really is. But before we sum up, its vital that you understand the similarities associated with this software and others. In fact, the post registration pop up led us to the understanding that we are dealing with a clone or replica version of the Bitcoin Trader, which is very similar in nature to Crypto Robot 365. In other words, the software is not safe and oddly enough we also received complaints is infected with Spyware which is designed to spy after your activities and sell you various products according to your behavior patterns on the internet. Remember, anyone joining News Spy is simply donating money to con artists who just switched product names and design. If you don’t want to suffer the same fate, we highly recommend you avoid it.

Some Viable Alternatives
Its true that most automated trading systems out there are not to be trusted and just designed to rob you blind whilst generating money for the promoters and thieving offshore brokers. However, we were able to locate a few legitimate systems which produce consistent profit over time, and we invite you to check out our short list of recommended software.

Our Judgement: Traders should avoiding the News Spy Scam. After testing the software and seeing the actual results for ourselves, we can pretty much say without a shadow of a doubt that if you decide to invest your money and join this thieving software, you will end up LOSING your money and that is a guaranteed fact. Please DO NOT be tempted to signup and never divulge your credit card information as these crooks can’t be trusted with your money. Don’t be a stranger, message us via our YouTube Channel, Facebook Group, and G+ profile.